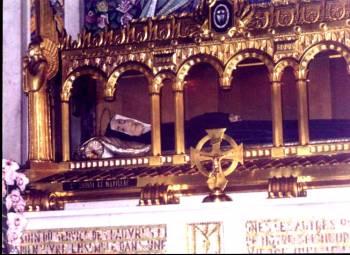 Louise de Marillac was born in Paris on August 12, 1591. Her mother died soon after her birth and her father died some year later. Educated at the Dominican Convert at Puissy, Louise took care of her aunt (a religious at the Convent.

Around age 16 interpreting the advice of her spiritual director, at the time, Louise married, Antoine le Gras. Antoine was the secretary of the Queen, so Louise lived a wealthy life.

During her marriage and especially after the death of her husband, Louise dedicated herself to the abandoned children in the streets, visiting and bring food to the prisons, following the examples of her spiritual director, Vincent de Paul.

She wanted to see every village in France have a clinic, school, nurse and teacher. While reaching out toward these goals, she became the founder of, "The Daughters of St. Vincent de Paul," in 1633.

Pope Benedict XV beatified Louise de Marillac, on May 9, 1920
Pope Pius XI presided at the solemnity of canonization, on March 1934
Pope John XXIII commemorated the Third Centenary of the death of Saint Louise de Marillac, in 1960 by declaring her "Patron of Christian Social Workers," on February 10th.