READERS: After reading about the apparitions in Egypt you may consider following this link. Want to know more about the Zeitoun apparitions and the relationship to the Nativity and the exit by Mary and Joseph into Egypt and the connection how this relates to the Book of Revelations? We recommend an excellent article by Emmett O'Regan which he sent to us. We offer the link directly to the article.
http://unveilingtheapocalypse.blogspot.com/2011/12/our-lady-of-light-and-apocalyptic.html 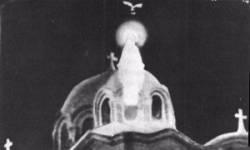 The Apparitions of Our Lady of Zeitoun, Egypt
By Joan Beauregard

Many Westerners have heard that Our Blessed Mother appeared in Zeitoun, a suburb of Cairo, Egypt. Few are aware of the electrifying, even delightful details of events that began in 1968 and continue elsewhere in Egypt right up to this present day.

And while there are some notable distinctions between Zeitoun and Medjugorje, the message is the same: peace, prayer, reconciliation. Perhaps the only real difference is that when Mary appears to thousands with diverse beliefs, languages and nationalities She is silent. When She comes to six children in one small village, She graciously uses their native tongue.

Here is the ongoing story.

On April 2nd, 1968, two muslim mechanics worked late into the evening at a garage across the street from St. Mary's, a Coptic Orthodox Church in the poor community of Zeitoun. A few women were on the street at the time, but little else was happening. Some sudden movement on the Church's dome caught the attention of both mechanics and women. What they saw astounded and frightened them: a young woman stood holding onto the cross at the dome. One mechanic, thinking she was about to commit suicide, screamed at her not to jump. Another ran for the priest--who could see nothing at all. It was the women who cried out, "It is our Holy Mother Mary!"

Thus began three years of almost nightly visits by Mary, visits heralded by extraordinary lights and immense clouds of incense. She was seen sometimes vaguely, often quite clearly, smiling, bowing, waving an olive branch, blessing, praying deeply, holding fast or kneeling before the cross of Her Son. These apparitions, often lasting throughout the night, were photographed, televised, witnessed by millions, written about in the international secular and religious press, and seen by both religious and political dignitaries such as Abdul Nasser, president of Egypt and self-proclaimed Marxist.

Spellbound people, often rooted to the ground, prayed the Rosary and sang Christian hymns. Muslims chanted, "Mary, God has chosen Thee....He has chosen Thee above all women", from the Koran. Some saw nothing. Many, many more saw it all, taking in Her radiance hour after hour, watching and praying, going home to rest, and returning--only to find Her still there, watching and praying over them!

The phenomena was photographed thousands of times, although the pictures are not clear and distinct as people saw Her at that moment. Although Mary never spoke, witnesses clearly understood Her message. And She only removed Herself entirely when Egyptian authorities, after a thorough investigation, decided the event was not a hoax--and could be a moneymaker. When, in 1971, the government started selling tickets of admission, Mary stopped coming at all.

In America, you might have seen a small blurb noting the events in Zeitoun buried in your Catholic newspaper. But most people here were preoccupied with Vietnam, or innercity rioting, or even the highly-charged and volatile Middle East situation, made worse by the Israeli-Egyptian war in 1967. Chances are you forgot, if you ever read it at all.

These continuing appearances have an interesting link: They have all occurred on holy ground: traditional places where the Holy Family stopped along their flight from Herod. At each of these sites, they were welcomed or turned away, and idols fell, the desert bloomed, miracles occurred. Their first stop in Egypt was at Zeitoun and their last, Assuit. As they turned back to retrace their Nile journey, Joseph received his dream to return to Nazareth--at Gabal Dranka.

So, it would seem, Mary has been retracing all the steps of the journey when Her Son first came to His people. Sometimes, along with doves and angels, meteors and strange lights, She has been seen in the company of Her beloved Joseph, Her Sacred Child, and even a lowly little burro. She began at the beginning and is now at the end of the Flight into Egypt where the little Family returned home.

The Coptic Catholic Church, which has built churches or monateries on each of these holy sites, has approved as authentic all these separate visitations of Our Lady. A fact hard to deny as more and more the clergy themselves have seen Mary and participated in the conversions and miracles.

The Roman Catholic Church has long enjoyed good relations with the Coptic Church, even though their supreme Archbishop is considered their Pope. We know Pope Paul VI looked favorably on the Zeitoun apparitions. It has been suggested that Pope John Paul II has also.

But are there good fruits being born of these visits? This is the vital question. And there is abundant evidence that tremendous good has been and is forthcoming. Innumerable conversions to Christianity. Deep changes of heart. Thousands of miraculous healings, beginning with the Muslim mechanic who pointed to the Lady on the dome that first night. His hand, scheduled for amputation the next day, was found totally healed when the bandages were removed prior to surgery.

And just as telling: in Assuit, that hotbed of jihad and terrorist activity, a city crowded with refugees from civil wars in Africa, where disease and poverty are endemic, and where there has been harassment and persecution of Christians, a definite shift toward peace, particularly between Muslim and Christian, is being reported.

If one cannot actually visit these sites, one can find good, solid information about Mary's visits on the web. One of the best is www.zeitun-eg.org. There are two very good online books: WHEN MILLIONS SAW MARY, by Francis Johnson, and OUR LORD'S MOTHER VISITS EGYPT, by Pearl Zaki. Many, many photographs are archived on the web, along with numerous articles.

But it is Mary's amazing love for Jesus and for us that shines forth. That, and the ever humble way--even in the midst of amazing phenomena--She uses to lead us to Her Son. Apparently She is leading us to Him along the physical path in Egypt just as, simultaneously, She leads us in Medjugorje through Her messages of peace, prayer and reconciliation.

READERS: After reading about the apparitions in Egypt you may consider following this link. Want to know more about the Zeitoun apparitions and the relationship to the Nativity and the exit by Mary and Joseph into Egypt and the connection how this relates to the Book of Revelations? We recommend an excellent article by Emmett O'Regan which he sent to us. We offer the link directly to the article.
http://unveilingtheapocalypse.blogspot.com/2011/12/our-lady-of-light-and-apocalyptic.html